Every day certainly has become an adventure I must say. Between the trials of trying to master the art of RV navigation and the tribulations of trying to keep a somewhat normal life in the context of a completely un-normal situation, there are times when the stress level reaches potentially explosive proportions. But would I trade any of it back for the “safety” of a world where we stressed about paying the mortgage (along with the myriad other expenses that come with the option of home owning domesticity – you know what I mean), worried if our vehicles would last the winter, wondered if we‘re spending enough quality time with the kids? You bet. But only for very brief instances when the afore-mentioned potentially explosive stress levels reach… well, potentially explosive levels. Then I remind myself that we chose to do this. We chose to swap THOSE stress causing situations for others.

So what do we stress about now? Slow computers that don’t allow certain operations particular to schooling or work. Kids that are somewhat reluctant to accept the idea that they are not on permanent vacation. The fact that we are not teachers in the traditional sense and are kind of in unknown waters. A home that is vulnerable to tree branches, sharp sewer edges, lack of electricity, non-level ground, and various road hazards. AND the learning curve of its not yet road sharpened owners. But is it all worth it? As Napoleon Dynamite would say, “Heck yes!”

Each morning as we were house/pet sitting for our friends in South Carolina we took the dogs for a walk along the beach. Some mornings we watched huge cargo ships coming in and out of Charleston Harbor. What a completely surreal sight as these incredibly massive boats powered along just a few thousand yards off shore, looking almost like giant floating cinder blocks. And then on the complete opposite end of the scale, a few dolphins swimming along just 25 feet away from us. As they moved along parallel to shore, everyone would just stop in their tracks to watch for as long as they could until the dolphins outdistanced them and the more observant dogs would stop barking at the strange shapes piercing the water’s surface. 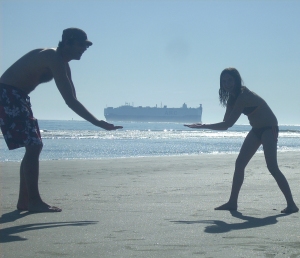 From South Carolina we came into Georgia with two more flat tires to deal with in three days (that’s three flats so far with the one in Virginia being my own fault). It is those times when everyone’s tensions rise to the surface (and I envision many dollars floating away) that again I question just what the heck we are doing. Are we crazy? You betcha. But as I sat outside in December and sipped coffee by a Palm tree it all came back to me. Once we had decided to take this trip, over the couple years it took to prepare, there came times when we thought about just forgetting the whole thing. But each time I thought that, it seemed an even scarier prospect to stay and not take the chance we have finally taken… So we start again hoping to avoid the pitfalls of the previous day and look forward to our time together trying to make this mad adventure work. Some days it does and some days it just… doesn’t. But there is always tomorrow.

After camping for a couple of days in Florida before heading further south, I was reminded of what I had forgotten about the South. The people are a little bit more easy-going and polite. Southern accents drawl off folks tongues in a kindly, friendly manner. The pace is a little slower and relaxed. And of course it is warm for the most part. There must be something about living in a warm climate most of the year that keeps people’s moods a little brighter. The only drawback is the strange sight of Christmas decorations of a “wintry” bend strewn across lawns landscaped with Palm trees and other foliage of the southern variety. Although I can hardly call that a drawback can I?

While visiting Tanya’s brother Brandon and his family in Titusville, we took a trip to the Kennedy Space Center. What a truly magnificent place! Watching the various films and presentations, I couldn’t help being awed by all the history that has taken place there. From great achievements such as our first trips into space and setting foot on the Moon, to horrible catastrophes where people have lost their lives. The early days of space exploration were truly a great time when the will and strength and pride of our country was really at a peak. The film of JFK announcing plans to send a man to the Moon (“We choose to go to the Moon in this decade and do the other things, not because they are easy – but because they are hard!”) put chills down my spine and made me yearn for a time when the U.S. was forging ahead and leading the world rather than wallowing in this state of mistrust and elitism, and heading nowhere…

The part of the tour that leaves the Space Center and goes out to Cape Canaveral was cool as we drove out to the observation platform. There in the distance you can see the various launch pads used over the years for rocket and shuttle launches. My sci-fi bended imagination couldn’t help but envision the Cape in the future with landing docks and ships buzzing around, effortlessly leaving the confines of earth for the stars. The kids were duly impressed with the Saturn V rocket and I enjoyed seeing Riv’s eyes pop out of his head when we entered the vast room that houses it. The thing really is massive and it astounds me that something that big could get off the planet. I think Mercy was more interested in the small chunk of Moon rock she took a photo of. Both of course (the rocket and the rock) were equally amazing in their own rights.

Now in Jensen Beach, Florida where we will stay docked for a bit, I’m finishing up my first post. We’ve been here for a few days already and the weather has been nothing short of fantastic. Today is a bit overcast and slightly rainy so it makes for the perfect opportunity to get some writing done.

As I try to wind this up it has become clear to me that leaving friends and family we have visited has become one of the more difficult aspects of traveling. It always causes me a bit of heartache to say farewell to people whose company and hospitality we have enjoyed, whether it be for a few days or a couple of weeks. But I must remind myself of the adventures that still lay ahead and the friends who we have yet to see. And with any luck, the friends we have yet to meet!

I must confess though that I get a certain buzz when we get the 5th Wheel hooked up, all systems are go, and we strike out again for our next destination. There is something just really cool about sailing this road-ship down the pavement with some good tunes to carry you down the highway. Yes!

So, as a certain band is fond of saying,
“Off on your way, hit the open road, there is magic at your fingers…”

Until next time,
Bri

12 thoughts on “The Open Road”