A week ago we went to Tennessee. It was so much fun! We stayed with some friends who live just outside of Nashville. They live on a hill so we had to back the R.V. up the hill. While my dad was driving and my mom and River were directing him, I got to sit inside watching.

We wound up sleeping inside their house (for four nights) because it was freezing outside in the R.V. The majority of the things we did in Tennessee was at their house. First we went panning for gold in the creek they have in the back woods, and found a lot! 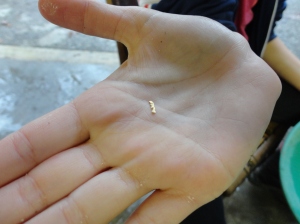 Then we went metal detecting with our friend who goes a lot. We got someone’s permission to go on their property but only my mom and I went. We found lots of Civil War relics! We found two bullets one was fired and one was not (I was the first person to touch them in 150 years!!), a square bolt from a wagon wheel or a cannon wheel, a lead poker chip which is just a melted and flattened bullet, a nail, a wire hook (it was used to hold the wire on a fence in place on the so the livestock wouldn’t escape), a clip to hold a soldiers sleeping bag in place, and a piece of a camp tool. We also saw rocks that were arranged in a circle and we were told that they used to be camp fires. They were all from the Civil War!! 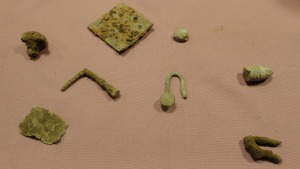 The next day we went in the back woods to explore. We saw three caves and I went in two of them. One of them was a coyote den! We knew because there was coyote scat everywhere! In that one there was also stalactites in it! I was a little bit scared to go in it and I kept saying can we get out now? Our friend told us that the caves were used for the early settlers to hide from the Indians. 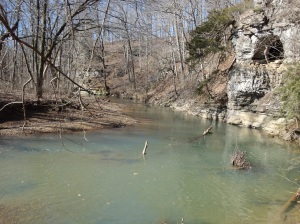 I liked Tennessee a lot. It sort of reminded me of Maine in the Fall.

9 thoughts on “Treasures in Tennessee”