I once told my kids that when the genie asks for my 3 wishes, one of the three would include the chance to live a day in the life of everyone.  It certainly wasn’t the answer they expected to hear and definitely made for some interesting conversation.   That was a few years ago. Truth be told, I frequently ponder that wish, most often while traveling.   Passing through cities I may glance upon a high-rise and wonder;  Who lives there?  What do they do?  What have they experienced?  Who do they love?  Are they happy?  Or, it may be while passing by an immaculate country home,  a gated mansion, a working farm, a run-down trailer in a low-income trailer park.  Up until we set out on this trip, I always imagined my wish taking place in the present lives of ordinary and extraordinary people (well, with the exception of maybe Janis Joplin). But now, I am taking my wish back in time.

Traveling through the south has been a very eye-opening experience for me personally. From Indian burial grounds to slave territory, civil war battlegrounds to the civil rights movement, the birthplace of jazz to the heart of  blues, I am constantly envisioning and imagining myself in the skin of those who experienced life during these different eras and events.

The historical road running north and south following the Mississippi River from Louisiana to Minnesota.  Also referred to  as “The Great River Road”  or the more familiar, ” Blues Highway”.  We did travel north along a portion of this road, and unlike Bob Dylan, I don’t feel the need to re-visit. Perhaps my expectations were too high.( After all, I was just coming from New Orleans where I was wishfully in a smoke-filled bar on Bourbon Street witnessing  Ella Fitzgerald or Billie Holiday wow the crowd.) Expecting to see an abundance of jukejoints and the likes, I was disappointed and saddened to bear witness to the undesirable sites along the way. Factories spewing fumes into the air, run down homes and boarded up family businesses made for some depressing scenery.  Not to mention acres and acres of unkept fields, capable of providing enough crops to feed an army.  Through it all though, I found myself sitting on a  front porch,  slapping my knee to the beat of the weathered instruments being played by my neighbors while belting out some melodic bluesy songs about life in the south.

A 444 mile historical path running from Mississippi to Tennessee. First created and used  by Native Americans, later to be the travel route for traders and explorers, the parkway is now a scenic drive devoid of modern-day necessities and conveniences.  The fact that the campgrounds along the Trace are all free made it even more enticing and we spent a few days exploring the trails and the surrounding towns.  One historical landmark that the kids particularly enjoyed was an old Inn, built in the late 1700s, much of it still preserved.   Run by a woman widowed twice with 10 kids, travelers were charged 25 cents for a place to sleep and a hot meal.  I  immediately removed myself from that scenario once the number of children she bore was mentioned!

A short distance off The Trace we encountered an incredible site seemingly very out-of-place today, yet still a reminder of  the changes our country has gone through. The ruins of an Antebellum Home, constructed by slave labor, Gothic in structure and set back in the woods was breathtaking. How fun to host and entertain  in my own mansion. I’m guessing I wouldn’t really have to break a sweat as I am the wife of a wealthy landowner, in Mississippi, during the slave years.

The capital of Alabama and a  major site of events in The Civil Rights Movement, we spent a day there so River could complete a project for English class.  The museums, along with a self guided tour through the city provided us with more than enough education about the struggles for equality in the 1960s.  MLK spent his time there during the bus boycott and The Freedom Riders encountered a violent mob scene upon their arrival. Try as I may, I can’t fathom being consumed with that much hatred.  Likewise, I may be second guessing my decision to stand up for what is right as my life is in great danger. 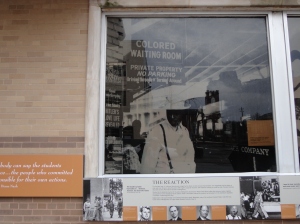 Not being much of  country music fans, and having been to Nashville before, our stay was short. Apparantly, there are two sites for The Grande Ole Opry.  We happened to be camped by the “out of season” one.  In addition, due to major flooding in 2010, many areas were still closed or being re-built. Nonetheless, I was gracing the stage as Lorretta Lynn singing” Coal Miners Daughter” while Mercy was hoping to bump into Miley Cyrus somewhere outside the Gaylord Opreyland Hotel.

Just north of Nashville is where Mercy and I went hunting for Civil War relics.  Although the finds were absolutely amazing, I was holding out for some more personal belongings. Like the wedding band of my young husband or the family keepsake I gave to my son barely old enough to fight in the war between the states.

The music, the legends, the food, the fun!  Sometimes I think that it’s a good thing  that we’ve experienced places like New Orleans and Memphis in the off-season, for the kids’ sake. As fun as it would be for Bri and I, I’m pretty sure that they wouldn’t enjoy the nightlife when the streets are lined with young tourists taking advantage of the fact that you can order ‘ to go’ beverages in the bars. Furthermore, I don’t know how proud they’d be of their Mom….the gin-soaked bar room queen in Memphis.  You know, the one that tried to take Mick Jagger upstairs for….something!