America The Beautiful….The appropriately named National Park pass we purchased for $80 which has paid for itself 3 times over already.  We love the National Parks and experiencing as many as we can on this journey is a goal we are trying diligently and joyously to fulfill.  The campgrounds, the visitor centers, the rangers, the educational programs, the wildlife and the hiking trails all contribute to  the overall beauty which  in turn feeds the soul with such profound feelings and emotions, sometimes difficult to put into words….but here goes.

This boundless view is capable of literally taking your breath away. Whether you’re a first time visitor or a return visitor (of 20 years, as are Bri and I), it takes more than a few moments to process its greatness. From the colorful layers of the earth, to the deep chiseled rock carved by The Colorado River, you literally feel as if you’re staring into a painting.

We stayed 4 nights in the park campground at south rim.  And, although it is considered the “touristy” region, our experience was what we made it…spectacular .  We hiked several trails to various look out points, sometimes alongside mules and sometimes alongside unprepared tourists. This was the first time any of us did what we referred to as a” backwards hike” where the ascent was on the return route.  It was a slight challenge at first, but we were well equipped with the necessary supplies, mainly enough water, to prove the trek gratifying.  I’m not so sure the woman caked with face makeup, wearing flip-flops, one hand clutched to her Gucci bag, the other to a frappacino, felt the same way.  We also biked around a portion of the rim, attended a ranger led talk on The California Condor (a rare bird with a 9 1/2 foot wing span-which, unfortunately we did not see),  witnessed a small, intimate wedding, admired a very peaceful sunset and  had a beautiful elk visit our campsite for coffee one morning.

Truly a fantastical backdrop of unique rock formations  everywhere you look.  Called “hoodoos”, these structures were formed by thousands of years of water and ice erosion. Boasting vibrant colors of red, orange and white, I initially had to remove my sunglasses to see if my eyes were deceiving me! 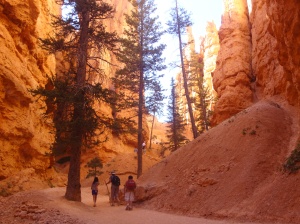 We stayed 2 nights in the park, again “backwards hiking” and walking the rim to the popular vistas. The names of some of the formations are quite fitting. “Fairyland”, “The Queens Garden”  and “Thor’s Hammer” were some of our favorites. After the first day, both River and Mercy, with a tinge of guilt in their voices, confessed to liking this canyon a little bit more than The Grand. We were also fortunate enough to have to stop for a herd of pronghorn, which aren’t often seen in the park.

Comprised of some of the tallest sandstone cliffs in the world and receiving its lifeblood from the ever flowing Virgin River, the scenery here is striking.

We entered the park on the east side, coming through the 1.1 mile sandstone carved Mount Carmel Tunnel. In hindsight, we should have come in on the west side as some problems did arise. Our trailer just fit the size restrictions and we had to obtain a tunnel permit ($15, which our pass did not cover), and as with all oversize rigs, we had to wait for rangers to stop traffic and let us through. Despite losing our trailer tire rim and hubcap somewhere in the tunnel, we were still able to enjoy the stunning views exiting the tunnel and descending down the long, steep and winding mountain.  Until……..roughly 2/3 of the way down, the trailer brake controller started flashing these bright red letters….OL OL OL.  Then, that smell of burning rubber and Bri realizing that our braking powers had all but fled. Luckily, there was a pullout and after parking it  for a while to let the brakes cool (and to recover from a near heart attack) we realized we had enough power in the truck brakes to crawl the rest of the way down and into the campground.  Upon leaving the park, our brakes started working again. But, after inspection, we did require a new $800 brake job.

We stayed here 4 or 5 nights as the inherent change of landscape and the presence of flowing water refreshed us physically and mentally after having spent weeks in  hot, dry, and dusty deserts. The desert in Zion is different as it harbors more than one environment and the ability to witness the  diversity in one place was a respite.  The fact that many of the trails had water of some form or another (Emerald pools, weeping rock , and of course the river) made for five happy campers. (Daisy also got some swim time in). Witnessing the sun cast it’s effervescent glow upon the majestic cliffs in the late afternoon was something to look forward to each day we were there.

Sculptured rock scenery consisting of towering spires, pinnacles, balanced rock, windows, natural bridges, and of course, arches, makes for some gorgeous photographic opportunities.  Although you can see a lot of the park by car, the foot trails and short hikes give you  more of a sense of the size, scale and density of the rocks. 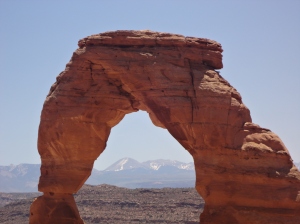 We stayed 5 nights just outside the park at a great campground in Moab along The Colorado. We did most of the park in just one day, hiking out to Delicate Arch, which is THE famous arch, the one seen on the State of Utah’s license plate.  A relatively easy but hot hike in which the payoff of seeing the enormity of  it in addition to having our photo taken underneath it was gratifying. I’m not so sure  it was like that for the young 20 something year old couple hiking out there with nothing but 2 bottles of Mountain Dew. I seriously thought we were going to have to forfeit all of our water when I saw the girl could only go approximately 8-10 steps before having to stop , sit down and catch her breath.  She claimed she was getting over a sickness.  Bri and Riv explained to her boyfriend that they should be carrying water and not a dehydrating, caffeinated, sugary drinks. I believe they made it back okay.

Landscape Arch was our next hike.  After watching the park video, we learned that a portion of the arch broke off in 1992, witnessed and caught on film by some hikers. Today, you can see the pieces that broke off and as you look up.  It’s hard to fathom that the thinnest part of the arch is only 6 feet thick. Who knows how long it will be before the entire arch crumbles. I’m just glad it didn’t happen in our presence. Knowing me, I would’ve stayed to catch it on film and sold it to National Geographic or The Discovery Channel…..for the soul reason of prolonging our trip.   Mercy received her first Junior Ranger badge here and now she is hooked on the program.

We have left the desert and are currently in Colorado. I do believe that the kids have a renewed sense of adventure after seeing such lush, green landscape in this state.  Or, it may have something to do with the fact that school is out and summer has been bringing more families to the campgrounds, which in itself is…..DELIGHTFUL!

8 thoughts on “Deserts and Canyons and Arches…Oh My!”