The air shifted and definitely became a little cooler as we drove west from the BurntwoodsStock music festival. With the music still in our ears and the fullness of heart from meeting new friends, we headed out to the Pacific coast. We had already spent the previous week around the Portland (Oregon that is… the SECOND Portland) area and had quickly become enamored with the place. Tan and I both immediately felt that it is somewhere that we could go eventually to escape the long winters yet still maintain a sense of changing seasons. It has that same feel that our own Portland area does with rolling hills, plenty of trees, a sense of culture and of course, good natured people. The only difference is the ocean is on the left. We definitely felt that we could fit in. But I’m years ahead of myself…
As I kind of work this narrative backwards a little (sorry) I have to mention the Columbia River and the beautiful landscape around it. We initially came west that way and were mesmerized by the gorgeous views of the river as we meandered along. I love seeing hills in the distance with a scattering of windmills along their peaks. It makes me feel that at least on some level, we’re trying to do the right thing environmentally. Many folks would argue that the sight of windmills clogs up the scenery and takes away from the natural beauty, but to me it takes me to another place and time. Perhaps a simpler one where wind power was a valuable resource to the surrounding village and where the people who lived there had more time to appreciate the real things in life like love, friendship, and family. My only regret was that we didn’t stay a couple nights there along that river.

So, after a brief stay in Portland and our great weekend at the music festival, we finally made it to the Pacific Ocean. Feeling a little like Lewis and Clark, our journey seemed to have reached a certain point. Not a conclusion, but something. A milestone perhaps as the Pacific Ocean was certainly a destination. But even at that moment I realized the journey is far from over.
One of the first things we noticed about the coast is that it’s not quite as “oceany”. It just doesn’t have that aroma of salty air that is ever present on the Atlantic. Regardless though, the scenery is breathtaking with rocky crags, pebble beaches, and tons of driftwood. The sight of the tall outcroppings of rock just a little ways out into the surf add an air of mystery to the place as they come into view through the fog. While I was always under the impression that pirate activity was relegated to the Caribbean, I could understand how this rough coast with its myriad coves and hiding places was host to its own rich history of piracy.
Another enchanting difference was the presence of seals floating in nearby waves. Resting on their backs for a bit, they would suddenly disappear into the foam to resurface a dozen or so yards away, their heads poking up to have another look around. As we ventured out across the low-tide sandbars towards the stony islands just off shore, we would come across various eddies filled with all kinds of sea life, like starfish and countless anemone of some kind or other. Gazing up at the cliffs along the shore, I couldn’t help but imagine what it might be like to live up there just through the trees always having a spectacular view into this majestic scene with the rays of distant sunshine slicing through the fog.
Back in-land we headed for we were told that we could not dare to miss; Crater Lake, especially if we were already this close. While taking us a little further south than we expected to go on this leg, I am happy to say that I am glad we did. Being the deepest lake in America, it is also known for its clear, blue waters. Driving around the perimeter, you are rewarded with spectacular views all around the lake as it sits in its recess formed by the collapse of the volcano Mount Mazama. On such a gorgeous day we could see clear across the five or six miles easily making out the rocky formations of the mountainsides as they descend into the deep blue crater.

Suddenly finding ourselves with a deadline in hand, we returned north again, although this time staying a bit inland through Oregon on a course towards Seattle. We picked up a job working the sugar beet harvest so now we only had a certain amount of time before we needed to be in eastern Montana for the month of October.
Along that way we experienced much more of the great Pacific northwest and the intense division between the fog and rain along the coast and the relative warmth and sunshine just a few miles inland. A couple nights outside of Forks, Washington made this phenomenon all the more (un)real as it is the area where the Twilight series takes place. It truly is a great setting for a tale of vampires and werewolves. Of course the town of Forks itself boasts more than a few tourist/fan traps, such as the high school and the beaches where the story takes place, as well as gift shops dealing in Twilight related finery.

A few casino parking lots later we found a wonderful little fairgrounds RV park we could call home for a week or so. From there we could visit Mount Rainier and hopefully meet up with an old friend in Seattle. Unfortunately the hookup with the friend didn’t pan out. (An aside: I’m wondering if people along our path fear that we are expecting them to put us up, and therefore feel uncomfortable making plans. I’d like you all to know that we are entirely self sufficient and don’t expect or plan on any kind of accommodations from anyone. If you have, or know of somewhere we can park it, great. But if not, please do not feel obligated to make arrangements for us. We will find a way.) But fortunately we met some new friends who we hope to see again.
Mt. Rainier turned out to be pleasant, though not an unexpected surprise. The drive through the park to the mountain itself wound up and up until finally reaching the base. With a few different paths to choose from to begin a hike, we picked one and began our ascent. After a half mile or so we began to distance ourselves from the denser foliage and emerged onto the inclining slopes of snow and flowers that form the lower regions of Mt. Rainier. 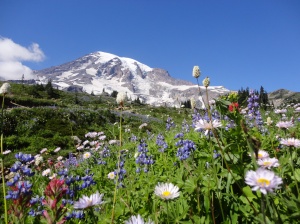 We continued on always moving uphill, with a tremendous view of the summit, and eventually decided that was good enough for us (as much as we could have gone on, we don’t always have eight hours to dedicate to long hikes that we can’t bring Daisy on) and began the gradual trek down. The geography surrounding us looking away from the mountain was almost as breathtaking as the peak behind us and I couldn’t help thinking that I was in The Sound of Music or something!
With the aforementioned deadline to be in Sidney, Montana for the fall beet harvest, we had to head a bit east again. After a quick trip to Seattle (see Mercy’s post) we made a straight shot across the northern plains with a stop in Idaho to see some family of a friend back home. With a welcome that felt as if we already knew each other, we fell right in and extended our planned stay a couple times. River was taught how to shoot and properly maintain a variety of guns, and Mercy got to do a little horseback riding; something she had been asking to do for quite a while now.

We couldn’t have hoped for a better and friendlier stay as we made some great new friends. I can only hope that they make their way back east so we can see them again sooner rather than later!
Sidney proved to be quite an interesting place (see Tanya‘s previous post). A strange dichotomy where many of the residents are quite well off due to the oil richness of the Bakken, yet the town  itself is virtually devoid of culture. Suffice it to say that after a couple of weeks I was more than ready to move on despite the kindness and hospitality of the locals we met and worked with at the beat harvest.
With just hours to spare we made our way south again trying to avoid the snow and increasingly chilly temperatures descending on the northern plains. Not entirely successful in our escape, we wound up spending a couple frosty nights in southern Montana and Wyoming on our path to northern California. With the west offering a warmer climate where we could explore the Redwoods and coastal routes that would take us down to the San Francisco Bay area, we were more than happy to finally escape the cold of the encroaching winter.
As I finish this up in our warm and cozy home on Christmas Day, I begin to think back on the last month and the craziness that has been our life selling Christmas trees since that retail nightmare known as “Black Friday”. Still in decompression mode from those busy, exhausting (yet exhilarating) few weeks, I’m thinking of friends and family back home and hoping all have had a very merry and happy Christmas. 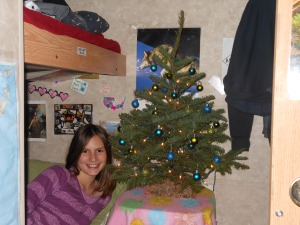 Next: A Tale of Trees

6 thoughts on “The Other North Coast”