When we first pulled into the parking lot of the San Diego Zoo, I could hardly wait to step out of the door of the truck. I have been waiting to come here since before we even left Maine.

After we went in and got our tickets, we headed to the zoo tour bus. We decided to go on the bus first because it covered 75% of the zoo and we would know where everything is. It was a double decker bus and we got to sit on top! 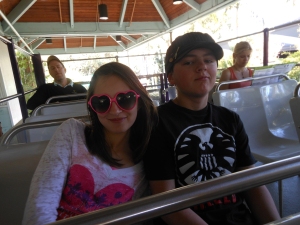 When we got off the bus we made our way over to the “big cats.” On the way there, we passed an exhibit with TONS of monkeys in it.  My favorite ones are the Capuchins. They are the cutest monkeys you could ever imagine, and they were definitely the most entertaining! They would pick the bugs out of each others fur and eat it, and the way they eat is so human-like!

I really liked the gorillas too. The troop leader is always a male and called a silverback. The silverback of the troop we saw was sleeping the whole time with his foot pressed against the glass. I felt kind of bad for all of the gorillas, because how would you like it if millions of people came to see you all day, everyday?

My favorite animal there was the cheetah. It would just pace along the fence watching your every move. Did you know that every cheetah at the San Diego Zoo has a dog as a companion? Well, when we were there the cheetah we saw was paired with a husky mix. River explained to me that they do this so the cheetah is more calm around people. Sadly we didn’t see the dog, but the cheetah was absolutely amazing! The tiger was also one of my favorites, but it didn’t do much except sit on top of a rock and look down on everyone. I was half expecting it to lick it’s lips thinking we would all make a great meal, but it didn’t.

There were also two different kinds of leopards, the black leopard and snow leopard. We saw the snow leopard, but not the black one because it was inside it’s little “house” the whole time. The snow leopard was not white it was grey, and had a tail that looked almost as dangerous as the claws. It was really long and very fat at the end.

After a while we finally got to the pandas. There was a mom and a cub. The baby was a lot more active than the mom. He would roll around, climb on stuff, and run around the pen. All the mom did was sit there, eat bamboo and watch her son.

When you think of polar bears do you think of big, white bears? Well that’s basically true except the “big” part. They are not just big, they are HUGE! Did you know that full grown polar bears can get up to 10 feet?! I don’t know how big the one we saw was but it looked pretty close to 10 feet! The way they get their food is very interesting. They’ll wait outside of a seals breathing hole for hours until a seal comes up, then they will grab it. They must be so patient! If I tried to do that I’d be getting up within 5 minutes trying to find food elsewhere.

On the way over to the elephants we passed more monkeys. This time there was an otter in the same exhibit as the monkeys. It was funny to see an otter and a monkey living together. Just like the Capuchins he was very entertaining, and happened to be my Dad’s favorite animal there. He was super cute especially when he would float on his back down the river, and catch the food the monkeys threw him.

Then we got to the elephants. There were about 3 of them and we were watching one of them eat hay. It’s really interesting how they use their trunks to take the food then put it in their mouth. The San Diego Zoo has 2 different types of elephants, the African and Asian. Two ways to tell them apart are the shape of their ears and their tusks. African elephants have bigger ears that are the shape of the continent of Africa and both males and females have tusks. Whereas Asian elephants have much smaller ears and only the males have tusks. 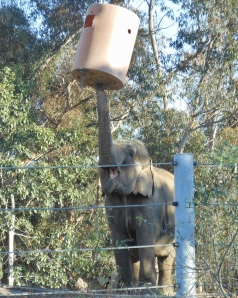 After, we went over to the giraffes. There were a few adults and a few babies. They were all so cute and a lot bigger than I thought they would be. A giraffes neck can be 6 feet long and weigh 600 pounds! Imagine having a neck that tall weighing that much! 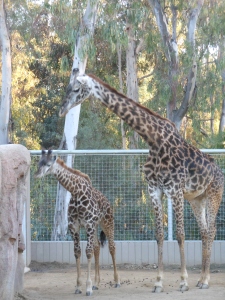 I thought the oddest looking animal there were the rhinoceroses. They have a protective layer of skin on the outside which looked like a huge layer of fat, it was very weird. Well I can’t say the rhino is the oddest looking animal there was, because the camels came pretty close. One of them was very old and had a lopsided hump. Through my research I found out that his hump is like that because he is old and his activity level is low, therefore he uses all his stored energy (which is in his hump) causing it to droop. He also had spit coming out of his mouth. I mean literally hanging out of his mouth, it looked like toothpaste. YUCK! The reason camels do spit is to surprise, distract, or bother whatever the camel thinks is threatening it.

I had such a good time at the San Diego Zoo and it is definitely on my list of places to come back to.

15 thoughts on “My AFFs (Animal Friends Forever) at the San Diego Zoo!”